If you’re the kind of web user that practically screams with frustration every time screen-covering popups appear…well, you’re certainly in good company. And as you probably know, it is even more infuriating when the same kinds of annoyances appear on a smartphone screen. You’d quite like to get rid of them, you do your best to hit the ‘X’ in the corner and you instead hit the popup itself and are whisked away.

Seriously…it doesn’t get much more frustrating.

Which is precisely why this will probably turn out to be one obituary that doesn’t exactly fill you with a sense of grief. Quite to the contrary in fact, as Google has announced that as of the beginning of next year, it is officially declaring war on ‘intrusive interstitials’ as far as mobile websites are concerned. The long and short of it being that just a few months from now, any websites continuing to bombard mobile visitors with these annoying interferences will face the wrath of the powers that be. Namely, a hefty punishment and the potential to plummet well and truly down the rankings.

Specifically, the time of death for intrusive interstitials has been pre-set for January 10, 2017, which is the date these penalties will start being handed out. In terms of why they have decided to turn their attention to these kinds of tactics, the statement from Google said that they “can be problematic on mobile devices where screens are often smaller.”

Something of an understatement, as those with devices boasting screens with less than 5 inches of real estate will know.

Now, if you have entered into something of a panic wondering whether or not you yourself will be in Google’s bad books, they’ve clarified things quite comprehensively. They’ve made it clear that “pages where content is not easily accessible to a user on the transition from the mobile search results may not rank as highly” and have mapped out the rules as follows:

Pop-ups that cover the primary content of a web page the moment the visitor arrives.

Pop-ups that cover the primary content of a web page when the visitor moves from one internal page to another.

Standalone pop-ups that force the visitor to interact with them, before the page’s content can be accessed.

Still struggling to grasp it? No problem – here’s the diagram Google published to illustrate what not to do: 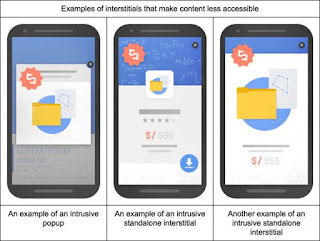 As for the kinds of interstitials that will still be permitted without punishment, Google gave the following guidelines:

Pop-ups that are necessary for legal reasons, such as those that inform about cookies, check the age of the user and so on.

Pop-ups of a size that can be easily closed and do not cover the primary content of the page.

And here’s the diagram outlining how things should/can be done: 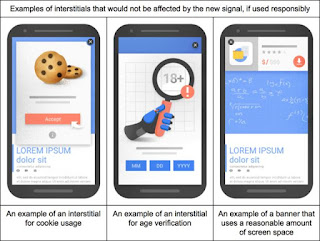 Technically speaking, it shouldn’t be an enormous undertaking to ensure that any mobile pop-ups you currently use abide by the new rules by the time they go live. In any case, those who don’t get their ships in order by January face the kinds of heavy penalties that may take some time to recover from.

Why Your SEO Strategy Has Hit a Brick Wall

Having invested heavily in an SEO strategy, the very last thing you want to see is a sudden slump. All seemed to be going as planned, only for your website to drop in the SERP rankings for no apparent reason. 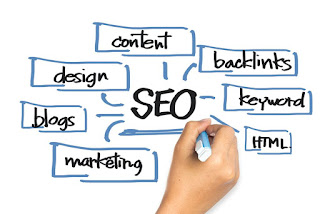 Of course there is a reason why this happened – it’s simply a case of identifying the cause and addressing it. Easier said than done? It certainly can be, though if you’re guilty of any of the following crimes against SEO, you’ll most likely have your answer as to why you’ve hit a brick wall:

1 – Too Much Keyword Focus

First of all, it’s crucially important to acknowledge that we have well and truly entered the age of the natural language search. These days, consumers in growing numbers are speaking or typing extensive search sentences into their chosen engines, as opposed to just using one or two keywords. As such, the kind of keyword focus that would have struck gold in years gone by is slowly but surely becoming obsolete.

2. Dancing Around Google’s Every Move

One of the most critical mistakes any business or marketer can make is that of continually adjusting their approach to SEO, in accordance with Google’s latest algorithm updates. Why? Well, quite simply because if you are focusing on what matters, you will automatically satisfy everything Google is looking for. The SEO rulebook will always change, but only as a means by which to highlight and promote sites of quality. Which means that if you focus on quality, you’re future-ready.

Never forget that each and every change you make to your website can have an impact on its SEO prowess. Even in the case of changes implemented to vastly improve the overall user experience, there’s still every chance you’ll experience a slide in the rankings. Which is precisely why it is a good idea to consult with the experts, before going ahead with any overhauls.

Just because your website ranked extremely well last week doesn’t mean the same will be true this week, if you are unwilling to regularly and routinely refresh its content. Even if your evergreen content is top-notch, it will quickly go stagnant in an SEO capacity and needs to be complemented with regular additions.

The same also goes for both the links you present on your website and the backlinks pointing your way. If your own links become invalid, it’s bad news. If you lose a quality backlink, even worse news. It’s crucial to carry out regular link audits to check on the health and relevance of both, in order to keep your SEO strategy on the straight and narrow.

Last but not least, it’s also worth bearing in mind that it may in fact be nothing that you yourself have done wrong, but rather what your rivals are doing better. If you are not continually stepping up your game when it comes to new-generation SEO, it is inevitable that you will be overtaken by the competition
Posted by Chris at 00:48 No comments: